I know I’ve left you hanging waiting for more twists on our Nordic EV road trip. The writing of the second part of this series took longer than expected.

The team needed a good night’s sleep and got one. The hotel where they stayed was surrounded by more than 40 AC chargers within a radius of 100 meters. Not bad at all… for the workers in the surrounding office buildings they belonged to. The hotel had none, yet another pleasant surprise in a country with one of the highest shares of electric vehicles. The adventure race (and the charge) resumes.

How about a morning visit to the super-fast chargers, then? There is one nearby, 6 stations with a maximum charging rate of 350 kW each. Our team also had a chance to grab the last empty spot and then talk to other EV owners and complain about slow charging. Funny, considering they were at 350kW stations, isn’t it? Some of you might know this, other Florida guys might not. Batteries do not charge to their full capacity at low temperatures. For some new owners this was still a disappointment, and by visiting various stations our EV experts were able to fully explain to all Kia, BMW, Skoda, Polestar, Hyundai and Ford owners how batteries work and why it is so crucial to have them warmed up before charging. A small household outlet or garage would have improved the situation, but our team didn’t have one, so instead of the possible 195kW they sucked power to 50kW, then briefly bumped it up to 120kW, then landed at 60 kW in the end. Even better than a disillusioned Kia owner whose battery warmer system didn’t work. This may happen in the future after a software update, but it hadn’t happened yet.

Charging the Taycan in the summer at 270kW was just a sweet memory.

Meanwhile, our guys entered central Sweden and were greeted by soft polar lights and a friendly freezing temperature of -20°C. This means that the difference between the outside and the inside of the car was 40 degrees. On top of that, they were riding on snow and ice at night and on hilly terrain. Still, fuel consumption was lower than on windy, high-speed highways. Averages of 27 kWh/100 km mean around 400 km of range. Also, the energy used to heat the car on a long trip is less of an issue than when driving to and from work in a city.

The real challenge, however, is charging speed, and that’s exactly why we wanted to take the BMW iX to this part of the world at this time of year. Now there’s a better way to find out how bad it is. Luckily for the battery, the team spent the night in a farmhouse hotel without a charger but with household outlets in the parking lot (ICEs don’t like freezing temperatures either).

Our guys were literally woken up by sheep and dogs barking. It was the signal that they could check how their prototype charging cable had worked. Polish company Green Cell had developed a charging cable, Mamba, for use with three-phase sockets (or regular sockets using an adaptor).

Unlike most competing products, Mamba lacks the well-known “brick” in the middle, and all electronics are miniaturized and housed in sockets on both sides. The Type 2 side includes an LCD screen showing charging status and connects to your phone via Bluetooth or using an integrated SIM card. It’s a clever solution that can replace a wallbox at home and become a backup partner on long journeys. Mamba did well to charge all night at minus 15°C degrees. Synchronization with GSM signal failed, but this feature will be tested again in Finland to see if it was just a roaming issue. Unsurprisingly, being in northern Sweden, the team began to struggle to find a publicly accessible charging station. All apps to the rescue (plugshare, ABRP, chargemap, plugsurfing, BMW Charging) and all the maps we had collected over the years to help start what was found. Seems like this part of Sweden is lagging behind in developing charging infrastructure, but there were some unexpected surprises like a large charging station in the middle of nowhere – in a small town near the Arctic Circle and installed by a company that makes ice cream.

To make things even more surprising, our drivers started hassle-free with our BMW Charge card.… Who would have thought! The team had less luck in the last city visited in northern Sweden. None of the maps in the full hands of the pilots were able to start the loaders at Gällivare. As many times before, the app to operate the chargers had to be downloaded and was only used for chargers located in the beautiful town of Gällivare — how convenient!

Ok, truth be told, the app had one user-friendly feature – i.e. it could be connected to any chosen RFID card to start the chargers (we used our GreenWay card). It was a small sweetener, but well appreciated.

The building we stayed in in the town of Gallivare, Sweden, is either new or has just been moved there, like many other buildings in the area. The reason for this extraordinary effort by the local authorities is a hole a few hundred meters long and a hundred meters deep – a deformation of the ground linked to mining in Malmberget. What once drove the industrialization of Sweden and Europe is now causing serious headaches for state-owned LKAB, local authorities and the people of Malmberget.

All the neighboring houses of this famous iron mine must either be moved or simply demolished. The sight of empty streets with lampposts, sidewalks and no buildings is quite an experience. We all want to believe we’ve learned our lesson, especially with all the plans to start mining new valuable particles of graphite, cobalt or lithium in the Arctic Circle. I want to believe that we will do better this time. For today, the site attracts former residents who come to remember and reflect. One of them, Kurt, was so deep in thought that he didn’t notice our team was driving and crashed into the BMW. No one was hurt thankfully, but we may have to use another car to complete our trip. For now, the team continued to advance to reach a small cabin they had rented in northern Finland. 330 km to go, no chargers along the way, minus 30°C outside. Does this sound like the ultimate winter EV test? I do, and judging by the tension in the crew’s voices, when we spoke on the phone, they all agreed.

The range claimed by the car was 350 km, the temperature difference between outside and inside was 50 degrees, three adults and a lot of gear inside, the BMW iX was ready to roll and it passed the test. The average consumption was 27.8 kWh/100 km. At the last station charging fee, that meant $8/100km. Knowing that the price of gasoline at the Swedish gas station was $2/l, we could estimate that the same trip in a comparable fossil-fueled SUV would cost $19/100 km. Electric vehicles win, again.

Also, our Mamba charging cable passed another extreme test charging the BMW at minus 32°C, which I don’t think anyone has tested in the lab before.

The team is made up of three people: two Poles and a Ukrainian, Olga. His parents live in Kyiv. At night, they hear shells flying above their roofs. Being in Norway, we can clearly hear the war on the phone. War is all around us. 400 km behind the Arctic Circle, in a small village, a quiet Norwegian speaks out, openly wishing Putin’s imminent death. Even in these peripheries of Europe, the invasion of Ukraine by Russia arouses emotions.

We love how Peter Badik of GreenWay put it: “I am shocked at how dependent we are on corrupt despotic regimes like Putin’s Russia. We must realize that their wealth comes from us, with countries buying their resources and thus funding corruption. I firmly believe that all companies developing e-mobility contribute a little to reducing this dependency. I couldn’t agree more. A brighter future ahead of you. Photo courtesy of WysokieNapięcie.pl 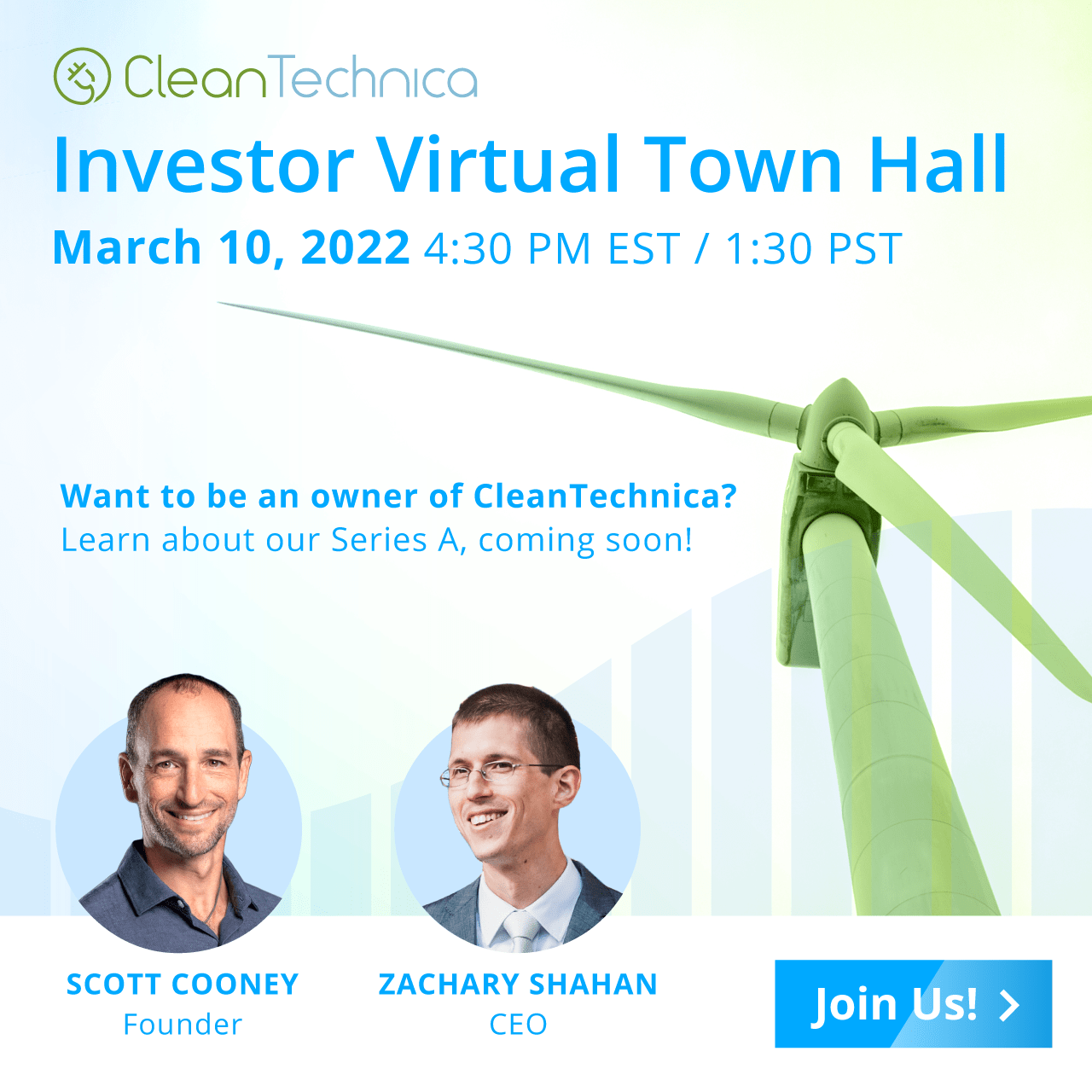 Have a tip for CleanTechnica, want to advertise or suggest a guest for our CleanTech Talk podcast? Contact us here.